The New Year dawn slowly lit up the world and my face burned.  The thermometer on the dash read 15 degrees.  I put collars on two dogs as quickly as I could and rushed to get my gloves back on.  The dogs charged the vast landscape with purpose and pose.  I heard a distant whistle of a cock bird from the south and started the march.  Both dogs were covering the ground thoroughly and investigating all the likely places that could possibly harbor a bevy as they started their morning routine.  It wasn’t long into the walk that I started to think that sleeping in would have been an acceptable choice.  The thought quickly left me as I saw what appeared to be fresh tracks in the sand.  With the dogs out front and to each side I walked ahead and haphazardly followed the tracks in the sand. 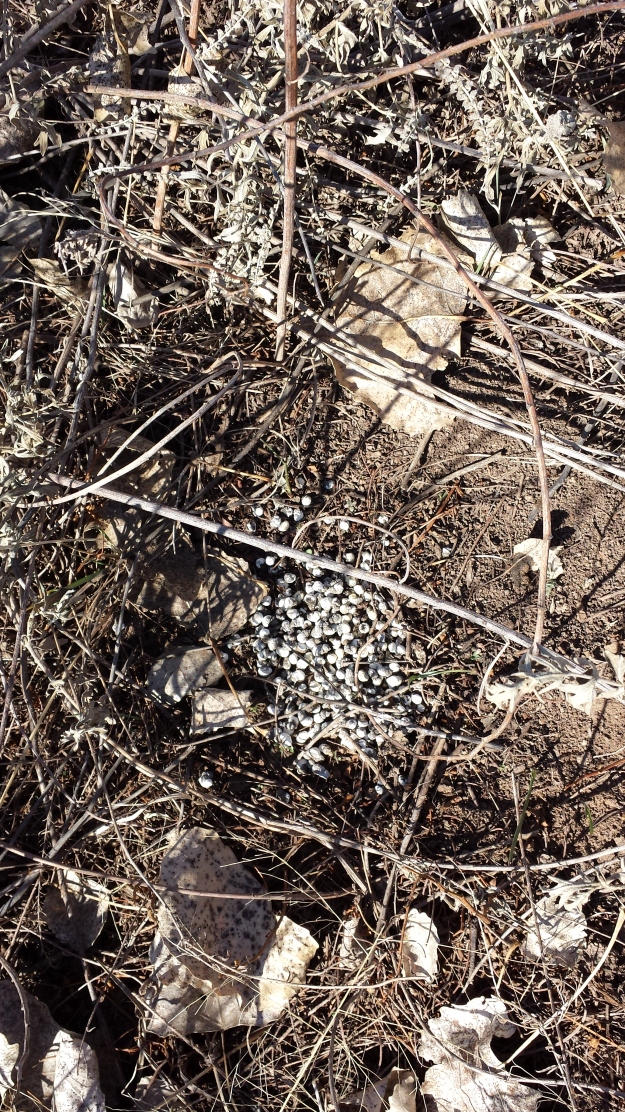 The sun was just above the horizon and I welcomed its warmth.  The blinding rays lit up the frost covered landscape.  The air was still and crisp.  The covey burst from the sage with a deafening blur of wingbeats.  They got up directly in the sun but flew hell bent for election to my left, toward the river.  I hastily swung my 20 and fell a bird with the right barrel.  My second shot was all for show, with nothing to show for it.  I couldn’t believe that both dogs missed this covey.  I didn’t care though.  We gathered up the first bird of the day and headed after the singles.  Before we reached the river bed there were tails in the sky with a Hide standing like a statue and the little setter backing.  “Whoop, Whoop..”  I said to the pointer as I walked in behind him.  I was nearly even with him when he took slow and creeping step and paused, then another.  “Whoa Hide!”  A single bird flushed from the frosty grass and gave me an easy straight away.  I knocked it down and the covey exploded.  I failed to pick out a bird and they sailed away.  A straggler popped and gave me a clear, yet challenging, hard crossing left to right shot.  I swung and slapped the back trigger.  He folded dead in the air.  I picked up the dead bird and called the dogs into hunt dead.  Not their strong suit.  Bella did a good job finding and catching the cripple.  I didn’t see where the covey had flown to, so we kept our course for the river, where we hoped to find some singles from the first covey.

I spied Bella on point to the front left and made a bee line for her.  As I got just within gun range a bird flushed at my feet.  Startled I through up the gun and shot.  The bird fell but was obviously not dead.  Bella left her point when I shot and headed for the downed bird.  We spend a few minutes looking for the bird I just knocked down.  And in those few minutes we experienced what could only be described as a “Cluster *&%”.  Both dogs were hunting dead, and singles were popping up all around us.  I swung on a long crossing bird and wasted the first barrel.  Then swung on another bird that offered an almost identical shot.  Missed again.  I broke my gun and extracted the two empties, as the bird we were looking for flushed under my nose and fluttered over a small knoll, never to be seen again.  After many more minutes and a few choice words I called the dogs off the search and accepted a lost bird.  I asked Bella if she forgot that she had a bird pointed about 70 yards away and sent both dogs in that direction.  Bella must have remembered as she darted straight over to the same area and resumed her point.  I moved in and flushed.  The open choke from the right barrel grassed the bird and Bella made a decent retrieve.  It was improvement at least.

We followed the wide and dry river bed for a while and the dogs found nothing that peaked their interest.  I walked across a pile of spent 12 gauge hulls and started picking up a mess that was left by what I assumed was a dove hunter.  As I was picking up the empties that lay scattered around  like a dirty sore, the garmin beeped.  Bella was on point.  I started off for her, and Hide took my cue and changed his heading as well.  The garmin said she was only 135 yards away straight ahead but I could not see her.  I kept Hide pretty close as I wanted Bella to have a little alone time with this covey.  I took my time getting there and thought it would be good for her to stand them a while.  The garmin know said I was within 30 yards but I still could not see a setter standing anywhere.  Hide moved ahead and disappeared over a small hill and into the lower part of the river bed.  I heard birds flush and hustle up the same small hill.  I saw both dogs standing and more birds took wing.  I rushed a shot at the last bird in the group and whiffed.  “Hide,… you big asshole!”I declared.  He claimed that he never saw her standing there pointing that covey and from where he dropped in he couldn’t have smelled them.  I told Bella that she had a really nice piece of work and it would have been perfect if Mr. Jekyl hadn’t shown up and crashed the party.  The covey had flown in the opposite direction that we were headed so we just moved on.

The next covey took wing as I was stumbling over a fallen cottonwood branch that the birds were using for hawk protection.  I missed a high percentage shot and then swung on a bird 180 degrees in the opposite direction and blanked again.  I could do nothing more than pocket two empty yellow hulls and take in the beauty of the morning.  As both dogs game cruising up, I asked them how that covey managed to go undetected.  They just stared blankly back at me.  We searched for the singles and Bella slammed a picture perfect point only to come undone when the bird decided to run off.  I lowered the gun and let that bird do some teaching as it flushed and sailed away with out the fear of a load of lead on its tail.  I whoaed Bella and made her stand for a while as I half heartedly flushed around hoping there would be another bird around.  After finding no other birds we moved on.

I was thought I was getting fairly close to the rig and I was daydreaming as I walked along when the garmin sang and then sang again.  I pulled it from my vest and saw that it showed both dogs on point ahead.  I walked around some willow thickets and saw both dogs standing on a little rise adjacent to some prime looking cover.  The pointer up front and the little setter girl backing intently.  I stopped to take a picture with my phone and then moved in for the flush.  I was even with the dogs and surveyed the possible escape routes that would make shooting the toughest.  I had some small cottonwoods to my immediate right that would make shooting that direction nearly impossible.  Birds erupted in every direction. I singled one out that took the left and most obstacle free route and left a cloud of feathers floating in the gentle breeze.  I spun 90 degrees to my right and took a poke at a bird through the trees to no avail.  We took a long time searching for the dead bird I finally let Hide wander off because he had given up the search and I was tired of calling him back to me to hunt dead. 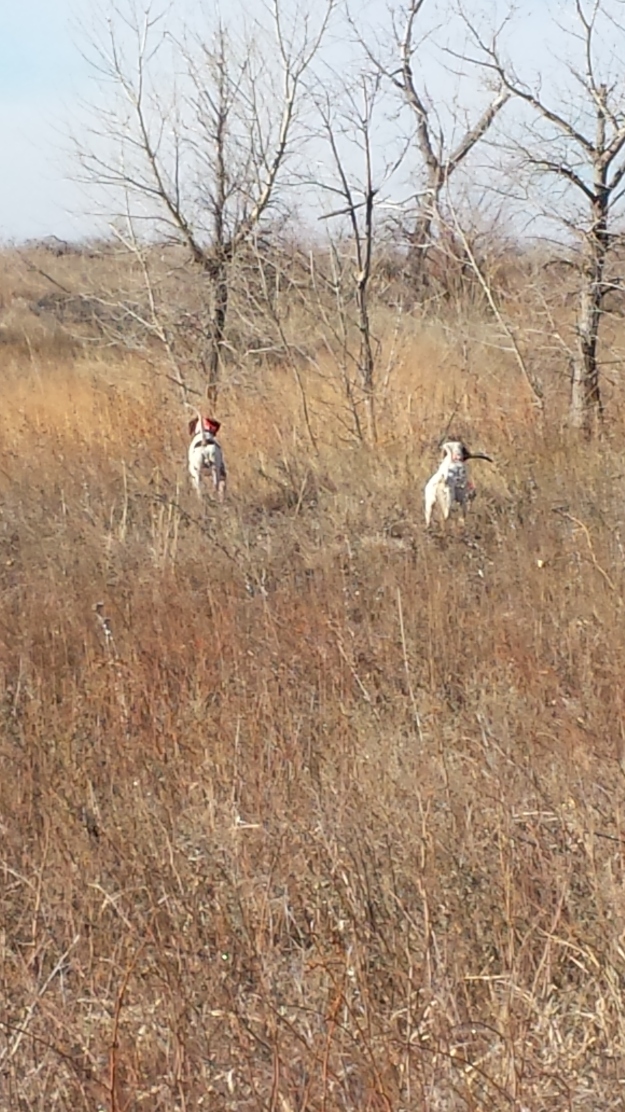 I had lost track of Hide while the Bella and I continued our search for the dead bird that snuck off leaving us with only a pile of feathers.  My phone beeped and I already knew what the text said.  “HIDE IS ON POINT.”  Apparently we were close enough for my wife, who had decided to sit in the warm vehicle due to the 15 degree thing, to spot a liver and white pointer standing in the weeds.  I kept looking for the bird on the ground as I didn’t want to lose a second.  Finally we gave up and headed for Hide’s point.  He was sure enough standin’ stiff as a board when we showed up.  Bell was off hunting my right but she never looked in his direction.  I finally yelled, “Whoa!” and she skidded to a stop and looked at me and then turned her head towards Hide.  It was beautiful.  As soon as she spied him she styled up into a really nice back to honor his point.  I moved in a flushed four birds in front of Hide. Two of which gave me easy straight away shots.

This was possibly the best two hours of quail hunting that I had ever experienced.  I got some great GoPro footage and am trying to figure out how to edit and post it.  I only with I would have taken more photos.  The afternoon consisted of running the pup and Magic and we only moved a few move coveys and picked up one more bird.  We had dinner with some old bird hunting friends and met some new ones.  All of which were staying at the same motel.  The next day proved to be just as good, if not better.  I hunted the pointer/setter duo again and they continued to make big strides in their wild bird progress.  As the weekend came to a close and we made the tiring drive back home, I finally felt the satisfaction of a great quail hunt.  I won’t forget this one for a long time. 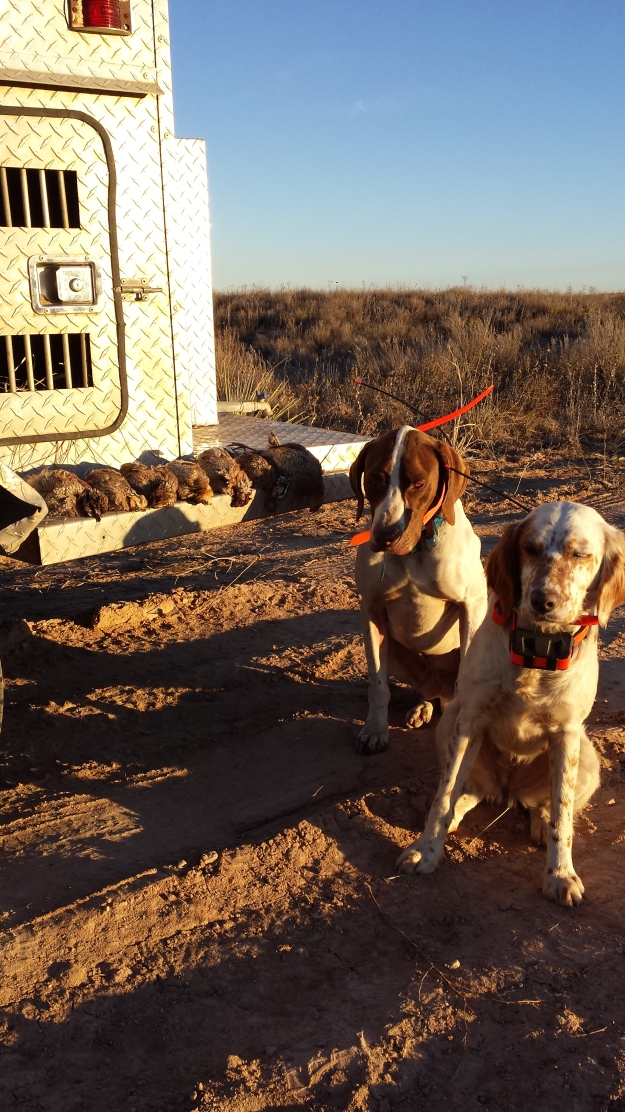 Two tired dogs after a few days of chasing bobs